Practicing psychotherapist and anger expert Moshe Ratson shows readers how to use their anger as a tool for personal transformation. 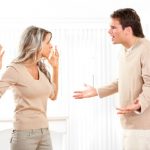 Whether your partner pouts, withholds sex, threatens, uses profanity, slams doors, punches walls, verbally or physically attacks you or your family, or worse; these behaviors are an attempt to control and inhibit their partner, and will usually escalate. The effort to control another person by using anger is not only extremely negative to approved social behavior, even if it sometimes works short-term, the behavior will accomplish the exact opposite over time. According to research, 80 percent of divorces and break ups are due to the deterioration of intimacy, which is much higher than the issue of infidelity and marital affairs.

In fact, the ratio of positive interactions to negative interactions between  happy couples is 20:1, where conflicted and soon-to-be divorced couples spirals downward from 5:1 to 0.8:1, as they reach the breaking point. Professionals are often able to predict the time when a relationship will end based on whether a partner combination is made up of attackers, “avoiders”, and soothers. Various combinations, along with the ratio of positive interactions and negative ones makes up the dynamics of whether or not an intimate relationship will survive or self-destruct.

Learning to manage anger in intimate relationship issues, not stuff it, and couples who learn to interact with skill not defensiveness and hostility can increase their positive interaction ratio with heart-felt and genuine responses, sensitive behaviors, and memorable healing moments will develop long-lasting and mutually satisfying bonds.

Couple can combat the effects of toxic behaviors by understanding the effects and long-term consequences of negative communications and working together to eliminating them from their intimate relationships.

First, understand that problems between couples often never are solved only managed. This is important to know because often what people see as “wrong” with someone is not wrong, just irritating to the partner, so couples cannot “fix” the differences in each other, only accept that they are different, and change the way they respond to the things that irritate them.

Some of the toxic behaviors couples can take responsibility for and manage are:

Criticism, defensive responses, attitude of contempt, withdrawing, or shutting down – known as stonewalling, using previous unresolved issues to escalate current ones. How couples begin discussions about unpleasant situations predetermines the outcome. Beginning a conversation with complaining, blaming, attacking the other, or harshness sets the tone of the discussion to jump into conflict. Responding with defensive tactics, out-doing the quips, sarcasm, and negative put-downs adds to accelerated hostility.

Even using facial expressions like rolling your eyes, body language and gestures, behaving with exasperation or sighing with defeat will actually create toxic escalation, rather than diffusing the anger. Nastily alluding to the impossibility of the situation and the relationship will also arouse increased negativity, such as shutting down or withdrawal lets the partner know you do not care, or you have given up.

How to Deal with Anger

If you are in a relationship where your partner will not be accountable for his/her anger issues, you need to make solid decisions about your part in this intimate relationship. Anger is unhealthy, not only for the person who accumulating angry feelings, but for those loved ones faced with the tantrums and inappropriate behaviors. Stress because of anger can manifest into serious disease. You can try establishing personal boundaries, allowing the angry person space, do not fan the flames. In addition to being non-reactive, people chose to be angry – people do not “make” anyone angry. You can chose to be assertive when the moment is right, and not allow your partner to inflict their anger on you. Using compassion and empathy is a good method to reduce anger in someone, but not at the expense of your own well-being. Avoid triggers, and use calming methods to diffuse the situation. Both sides need to realize that forgiveness is the only path to true peace in a relationship.

The Intimate Relationship that Survives Anger

Couples that can weather storms of anger in intimate relationship and conflicts are those couples with 20:1 positive interactions. Couples that spend quality time enjoying each other, expressing intimacy, being intimate, and develop times to just be together and share, have ammunition of the positive kind that buffers against any negativity. These relationships do not just “happen,” couples have to learn and develop the positive skills that work. The behaviors must be repeated over time before they will become natural responses.

Managing anger in a relationship is like a pressure valve on a water heater designed to release when the pressure inside is too built up. People have more than two choices in handling anger, some work to suppress their anger; others feel they need to release it. In fact, it is healthier is to neutralize your anger with exercise, breathing techniques, anger management therapy, and couples counseling.

Get a FREE Phone Consultation